From the Living and Learning Department

Saturday, 10.10.2020 and we could not resist, it was quite a fancy date anyway. We just had go to the brand new Charging Park Hilden, which had its second official day of operation that Saturday.

We drove through some stretches of wet road on the way there and encountered some headwind, so consumption was a bit higher than usual. With a small charging stop at the Kamen Supercharger we arrived relaxed at the highway intersection Hilden. And we were definitely neither the first nor the only ones, with court rapporteur and youtuber-in-residence Nino already in attendance.

All criticisms of current charging infrastructure which I made in my book „Das E-Dilemma oder die Freude am Fahren“ (currently only available in German), which included unlit charging stations in the no-mans-land, no canopies or roofs, no infrastructure and not even a garbage bin – all of that went totally out of the window with this magnificent Charging Park 🙂 🙂

This new facility is currently probably the biggest in Europe, but does it matter? It is definitely the best one and that’s what counts for customers like me! Particularly since all possible types of charging options are available, while sanitary facilities and catering are right between the chargers and not a mile away. The layout was done in an efficient and thoughtful way, experienced e-mobility people at work.

The installation boasts 20 Tesla Superchargers (both the latest V3 but also V2, if the car has not yet been converted to CCS) and four hulking Fastned chargers, which can handle 800 V systems and provide CSS and CHAdeMO plugs. For more temperate charging sessions there are numerous AC charge points ranging from 7 kW to 22 kW of charging power, which provide electricity at unrivalled prices starting from 15 Cent per kilowatt-hour. Those can be activated with a plain German checking account card, which is a perfectly simple solution. Four regular wall sockets (Schuko-style) complement the lot, any electric vehicle can be charged here for sure. Still, that’s not even the complete project, there’s a second stage yet to be built!

A definite highlight is Roland Schüren’s Seed & Greet Bakery, providing a choice of fresh bakery products and tasty coffee at regular high street prices, not highway station rates. Unsurprisingly, the queue of customers extended far beyond the entrée several times during our visit. While queuing, we noticed the constant and stiff breeze in the area – we hope that Roland Schüren will be permitted to build the additional wind generators he’s trying to get approved…

Moreover, in this Charging Park the technical details are as tasty as the food on offer: The 340 kW peak solar generator is complemented with a 1 MW buffer battery to keep peaks away from the power grid and to store solar power which is not consumed immediately. Thus a very substantial amount of energy is generated emission-free and right at the point of consumption, completely avoiding transmission losses. The local energy provider did not need to reinforce the connection to the grid.

That Saturday all parts of the system were taxed quite heavily as virtually all of the charge points were used most of the time and everything worked without a hitch. Electric mobility has come an exceptionally long way since the days of pioneering homegrown constructions and many people are not even aware of that.

With a constant stream of arrivals and departures it was easy to hear how exceptionally silent electric mobility is in fact. Despite all traffic it was easy to have conversations without raising the voice and no smelly fumes disturbed sensitive noses. The three or four combustion cars, which stumbled into the place, were extremely conspicuous and not really in a positive way.

That day and in that place the demise of the combustion engine technology was staring into our collective faces. Even though the lot of the charging customers were naturally Teslas, we could see the gamut of electric cars currently sold in Germany plus a Twizy and a scooter from Niu (regular wall sockets are available!) and observe the charging behaviors of these quite different vehicles.

We tried all available types of chargers ourselves, starting with the huge and heavy Fastned charger, offering 300 kW of peak power.

„Why is a Tesla charging at a Fastnet charger?“ We did not have to wait long for this question. Curiosity has its own reason for existence!

185,6 kW was our charging peak that day, as a long construction zone on the highway caused the battery to cool down and we arrived with a slightly higher-than-ideal state of charge of 24 %, so a new record was just not in the cards. Nevertheless, it was an awesome performance level, which we kept up for exactly 3 minutes, as the electricity price of 58 Cent per kWh was higher than on the Tesla Supercharger.

At any rate: 7,6 kWh charged in three minutes is truly impressive.

Second station: Tesla Supercharger V2, we were not in a hurry. After some queuing time and an Espresso, the battery had arrived at a charge level of 85% and we switched to a 22 kW AC charger which had opened up. The Supercharger stall we left did not stay vacant for too long…

There are several parking spaces without charge points located conveniently in the Charging Park, ideally to put the car if it’s already full and the food break needs extending or just to park for picking up some bakery goods.

We took the opportunity to advertise for our group of electric car owners in Wolfsburg!

As mentioned previously, it was quite windy so we could not use the sign for long. Nevertheless, it landed us several interesting and animated conversations.

Time passed quickly and the state of charge reached a 100% and so we departed from this fantastic facility, heading for Wolfsburg. Thanks to dry roads and a bit of tailwind we covered the whole distance of 350 kilometers on a single charge with 7% to spare. Some stats: Our trip took 703 kilometers and we used 133 kWh, which is 18,9 kWh per 100 kilometers or less than 1,5 liters of fuel-equivalent. We drove a Tesla Model 3 Long Range on 18-inch Aero summer wheels inflated to 3 bar.

What’s the bottom line? The Charging Park Hilden is an electric car driver’s dream come true. And it shows that integration of seemingly unrelated businesses can yield fantastic results, much like Tesla does it. All of this was achieved by a baker who did not want to stick to his buns.

It’s the smart combination and integration which yields real benefits for customers and project partners, not the usual silo-thinking: Here’s the operator of the solar generation, over there’s the baker, right beside the electricity broker, all of them working in splendid separation, which is inefficient. Roland Schüren is able to sell electricity from 15 Cents up since he’s not paying any intermediaries or billing providers, the money flowing to him directly from the customer’s checking account. Exactly this integration thinking makes all the difference for the Charging Park.

Both its engineering and arrangement make it a project ahead of its time, as is the busines model.

We wish the utmost of success and many emulators!

If you want to read more in German, you can find all information about my book on e-mobility here: „Das E-Dilemma und die Freude am Fahren“ 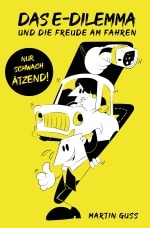